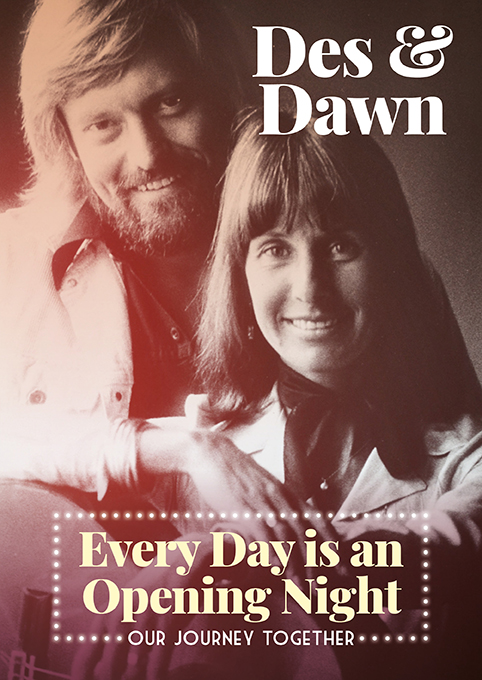 Every Day Is An Opening Night

“Des and Dawn became the most popular couple in showbiz. They sang, composed, danced, performed and dished out something always in short supply in this troubled land: humour. They made people laugh.”

Both a deeply personal memoir and a glimpse into their sociopolitical activism, Every Day is an Opening Night by Des and Dawn Lindberg documents the joys and challenges of a lifetime in South African theatre – as musicians, performers, songwriters, stage designers, managers, impresarios and ultimately legends of the entertainment industry.

The book traces the duo’s 55-year career, from singing folk songs in the Troubadour coffee bar in Johannesburg to taking their “Folk on Trek” shows on tour across South Africa and (then) Rhodesia, and producing and performing in major musicals all over southern Africa. Highlights of their story include their controversial multiracial production of Godspell, the duo’s legendary Sunday-night Soirées and the founding of the annual Naledi Theatre Awards, now in their 18th year.

Their story unfolds during a turbulent era in South Africa’s history: a time when local unrest, international opprobrium, sanctions and an intransigent government combined to create a challenging environment for artistes. Along the way, they worked with famous musicians, endured Special Branch attention, had their albums banned, won and lost court cases… and quietly persevered, undaunted, as musical anti-apartheid activists.

Their friends and collaborators constitute a roll call of some of the best-loved personalities in the arts and show business, from Jeremy Taylor and Mark Banks to Johnny Clegg and John Kani, with appearances by the legendary Taubie Kushlick, Pieter-Dirk Uys, author Gordon Forbes, pianist Richard Clayderman and UK comedian Spike Milligan. The reminiscences are told with a light touch – sometimes poignant, frequently funny – and enhanced by a generous gallery of photographs.

While the original manuscript was completed before the tragic loss of Dawn in December 2020, the book now stands in honour of her life, telling the tale of two pioneers of South African entertainment in their own words. As Des writes in the coda: “If this book achieves nothing else, I am determined that it will help me to sign off on our story in a way that does justice to the extraordinary leader, wife, mother, partner and lover Dawn was. Our story is a joyful one, and we tell it together as a celebration of life.”

Read about the authors
Close Menu